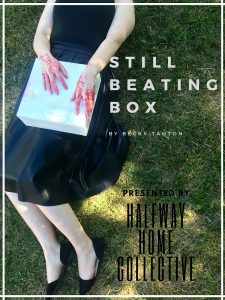 Written by: Beck Tanton
Directed and Performed by: Scott Marleau and Becky Tanton

Still Beating Box is an original avant garde production, with its world premiere at ON THE EDGE fringe, exploring personal loss and the way we move through grief. Emilie (Becky Tanton) has made a career out of pain removal after cutting out her own heart. Smith (Scott Marleau) haplessly stumbles into Emilie’s life in the wake of his mother’s death. Set in an abstract world not so different from our own, where one can literally remove the pain from their body, this play begs the question, “Are we better off without it?”

This is Scott’s fourth and Becky’ second appearances at ON THE EDGE Fringe, and at last year’s Fringe they won the Best of Fringe award for Halfway Home Collective’s inaugural production of One Good Marriage by Sean Reycraft. Scott has done two full length original comedy reviews, The System is Down (which won the Best of Fringe award at ON THE EDGE in 2015), and 2016’s World Tour: A Tragedy in One Act. Becky got her full length debut with her original play how to drown gracefully, which was produced by Toronto’s Filament Incubator, where she played the principal character, Kat.