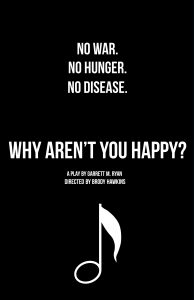 Why Aren’t You Happy?
Presented by Bird on Stage Productions

In the near future, humanity tires of human error in government and elects OZ.BAT, an artificially intelligent computer program to the presidency.  After leading a failed revolt, posthumously dubbed “The Rocker’s Revolution”, Gavin Scott finds himself in a psychoanalytic session with an artificially intelligent therapist. During this, he revisits his memories of pre-OZ America and explores his love for the archaic practice, known as “Rock N’ Roll”.