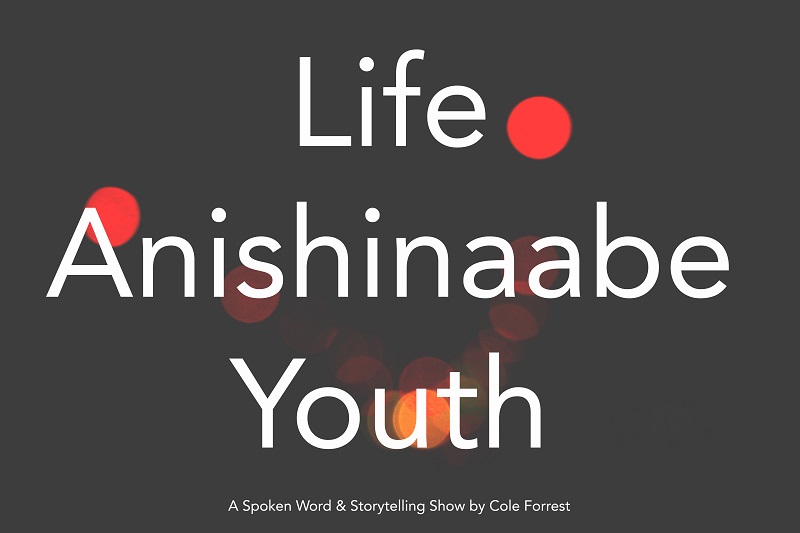 Join spoken word artist and story teller Cole Forrest on a deeply personal exploration of culture, history, loss, and curiosity. Through personal stories, visuals, poetry, and song, Cole Forrest shares with the audience the experiences of the life as an Anishinaabe youth.

Cole Forrest is an Ojibwe artist and spoken word poet based out of Nipissing First Nation in North Bay, Ontario. He strives to bring his understanding and compassion for arts to a level that is perpetual. By always seeking new horizons and pushing to be the best he can be, Cole is forever learning new techniques to hone his craft. Cole has trained and honed his craft at the “Big Medicine Studio” while working with the group Aanmitaagzi. Cole has worked with the group Aanmitaagzi for several years on various performing arts pieces at the local, provincial, and nation-wide levels. Cole has written, directed, and acted in various student short films as well as fringe festival theater pieces, and musicals. Cole is a recipient of the Ken and Ann Watts Memorial Scholarship of “Sears Drama”. Cole’s play “Speaking Mind Spoken Word” was shortlisted for the Wayne Fairhead New Play Award. Cole is also a recipient of the James Bartleman Indigenous Youth Creative Writers Award. Currently, Cole works with the nation-wide music education group Coalition for Music Education in Canada as an embassador for their Youth4Music Program, sits as a co-chair on their National Youth Council, and leads their First Nations, Metis, Inuit Projects. As a film student, Cole continues to write, direct, create, and work on independent and student short films. Cole Forrest is regarded as an emerging cultural leader of Northern Ontario. He is proficient in movement, theater, media, music, and most notably, writing.