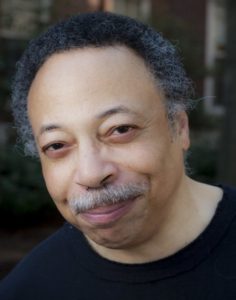 About the Artist:
The 4th Poet Laureate of Toronto (2012-15) and the 7th Parliamentary/Canadian Poet Laureate (2016-17), George Elliott Clarke was born in Windsor, Nova Scotia, in 1960.  Educated at the University of Waterloo, Dalhousie University, and Queen’s University, Clarke is also a pioneering scholar of African-Canadian literature, with two major tomes to his credit:  Odysseys Home: Mapping African-Canadian Literature(2002) and Directions Home: Approaches to African-Canadian Literature (2012) .  A professor of English at the University of Toronto, Clarke has taught at Duke, McGill, the University of British Columbia, and Harvard.  He holds eight honorary doctorates, plus appointments to the Order of Nova Scotia and the Order of Canada at the rank of Officer. He is also a Fellow of the Royal Canadian Geographical Society.  His recognitions include the Pierre Elliott Trudeau Fellows Prize, the Governor-General’s Award for Poetry, the National Magazine Gold Award for Poetry, the Premiul Poesis (Romania), the Dartmouth Book Award for Fiction, the Eric Hoffer Book Award for Poetry (US), and the Dr. Martin Luther King Jr. Achievement Award.  His books are available in Chinese, Romanian, and Italian.

Curatorial Statement by Clayton Windatt (Zakide):
Working within the movement towards a Guaranteed Basic Income in Canada, I have had the privilege to meet and speak with many people including Craig Berggold and George Elliot Clarke. I wanted to program these two artists back to back as a way of making connections between the long-standing activism in the art sector and the work being done today. Craig helped me in authoring and editing a letter currently addressed to the Prime Minister of Canada demanding changes that will impact all our lives when basic income becomes something that every human being living in Canada receives. Craig’s media-based multi-arts piece from 1988, Up to Scratch, embraces an energy from that time period where people were coming together to support each other and push for higher levels of equity. George read his poem, Basic Income, at one of our recent meetings, bringing forward a summary of emotions and actions calling on us to unite. I feel that the energy of the past 30+ years coming together in new ways and wanted to share these two works with you all.

If you are interested in supporting the movement towards a Universal Basic Income for all people in Canada, please visit this website and consider writing your local MP & MPP to discuss the importance of this issue.