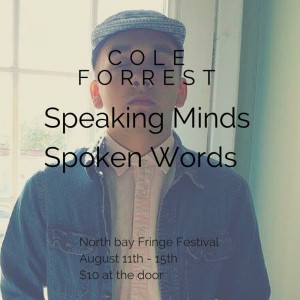 Spoken word artist Cole Forrest performs a 40-minute set of stories, songs and spoken word pieces “about becoming in touch with his Aboriginal Culture, accepting of himself and the modern, dream-filled mind of a teenager.” Forrest explains that spoken word is a competition-based style of poetry that you don’t usually see much of in North Bay. “It can be very political or very personal – mine is personal to an extent.” Forrest is a local artist who has been performing in the area, and provincially, for the past two years with Aanmitaagzi, the multi-disciplinary arts organization based out of Nipissing First Nation.