Here is what would have taken place!

The second annual Sun Dog Theatre Festival was scheduled to take place from March 25th – 28th, 2020 at Widdifield Secondary School (320 Ski Club Rd, North Bay). The festival would have featured Trudeau Stories, written and performed by Brooke Johnson and directed by Allyson McMackon, as well as Barefoot on the Moon, from The Proscenium Club, written and directed by Joshua Bainbridge. 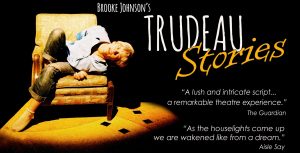 A remarkable story of a surprising friendship, this solo show has been affecting and wowing audiences and critics across the country since its premiere in 2007. In 1985, while a student at the National Theatre School in Montreal, Brooke Johnson became friends with Pierre Elliott Trudeau. In a mesmerizing 70-minute performance that is rich with humour and grace, Brooke gives us a personal insight into the man and the times that is not to be missed. At once vital and charming; “beautifully written, poignant and very funny” (CBC Radio), Trudeau Stories is about friendship and loss… and about who the heck we think we are.

“Johnson has enthralled audiences throughout the nation with this play…It is a work of art…of genius. Trudeau Stories is remarkable in every way.” – C.Scrafield, Orangeville Citizen

Proscenium Club’s Barefoot on the Moon 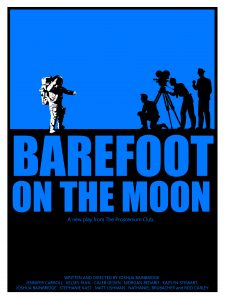 Sudbury Ontario, 1969, a small group of amateur filmmakers are commissioned for a very big job. They must create one of the greatest lies in recorded history. They must convince the world we landed on the moon.

Bainbridge is not making a commentary about the moon landing being faked. The play may be set in 1969 but it is very much about asking questions today, where media plays such a strong hand in orchestrating public perception. Still, Barefoot on the Moon grapples with “high conspiracy” in a darkly funny and unexpectedly human way. Whether astronauts stay in a warm studio on Earth or head into the chilly vacuum outside our planet, this mission is fraught with intrigue, laughs and danger. 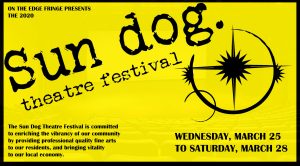