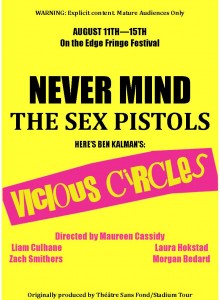 Laura Hokstad produces this hour-long play, which was the winner of the 2012 Montreal Fringe’s Next Stage Award. Vicious Circles is a surreaslist tale about punk icon and bassist of the Sex Pistols, Sid Vicious and the tug of war for his life between his band mate Johnny Rotten, his manager Malcolm McLaren, and his girlfriend ‘Nauseating’ Nancy Spungen, at New York’s Chelsea Hotel. Mature audiences only. This production, written by Ben Kalman, is directed by Maureen Cassidy, and stars Liam Culhane, Zach Smithers, Laura Hokstad, and Morgan Bedard.